To be able to give you the best price possible for the Paddleboard Snorkel Reef Tour we use dynamic pricing. Price given is the price per person for 2-4 persons.

DYNAMIC PRICING ONLY FOR BOOKINGS AT ALOHA PADDLE CLUB AT FUSION AND NOT THE NEW WATER SPORTS CLUB AT THE HYATT GRAND RESORT!

 5/5
The best option, just do it! The Paddleboard Snorkel Reef Tour it was one of the best things I've done during my stay here in Playa del Carmen. Sander was an excellent instructor, always attentive to my partner and me about whether we were doing well or not as we were beginners in this. He was aware of the direction we were going, attentive to the "photographic moment" and taking incredible photos. 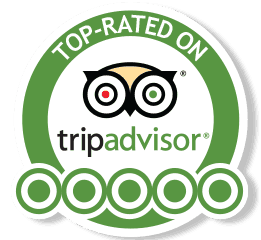 The Paddleboard Snorkel Reef Tour is perfect combination of standup paddleboarding at sea with snorkeling on a nearby reef.

The reef in front of Playa del Carmen is part of the Mesoamerican Reef, the second largest reef in the world. The reef is spread over a length of almost 1,000 kilometers, having its starting point in Contoy Island near Cancun and ending in the islands of the Bay, in the country from Honduras.

It has an extensive biodiversity, thus forming a large habitat for an innumerable number of marine species. In total, this reef inhabits more than 500 different species of fish and more than 60 wonderful species of stony corals. 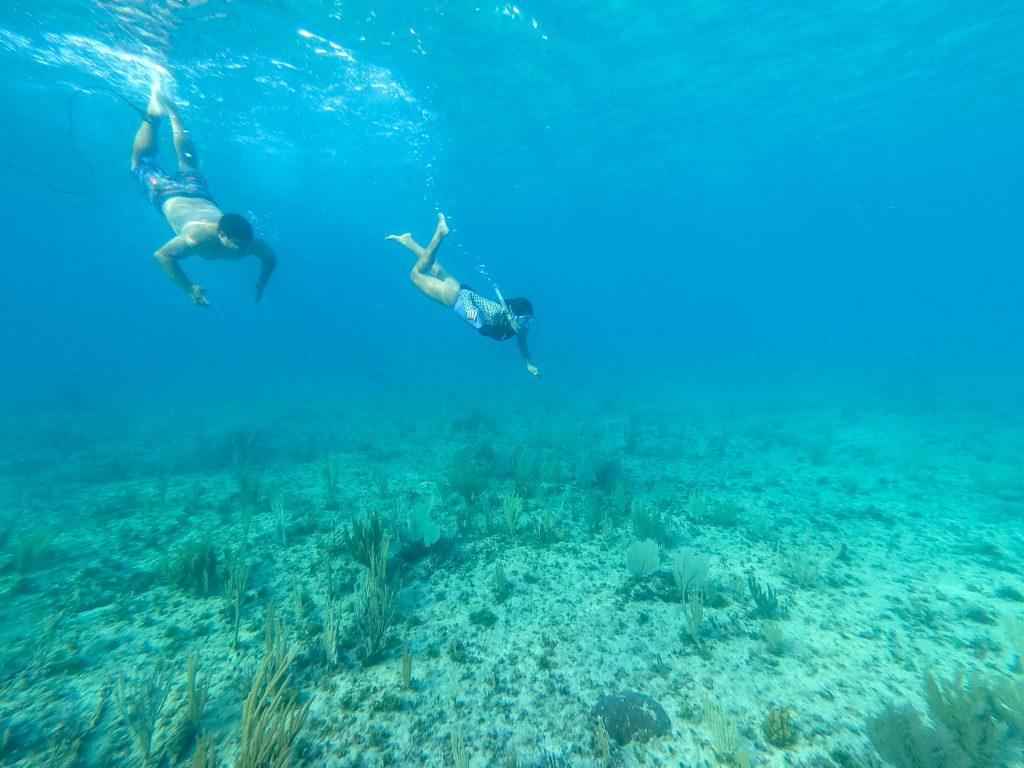 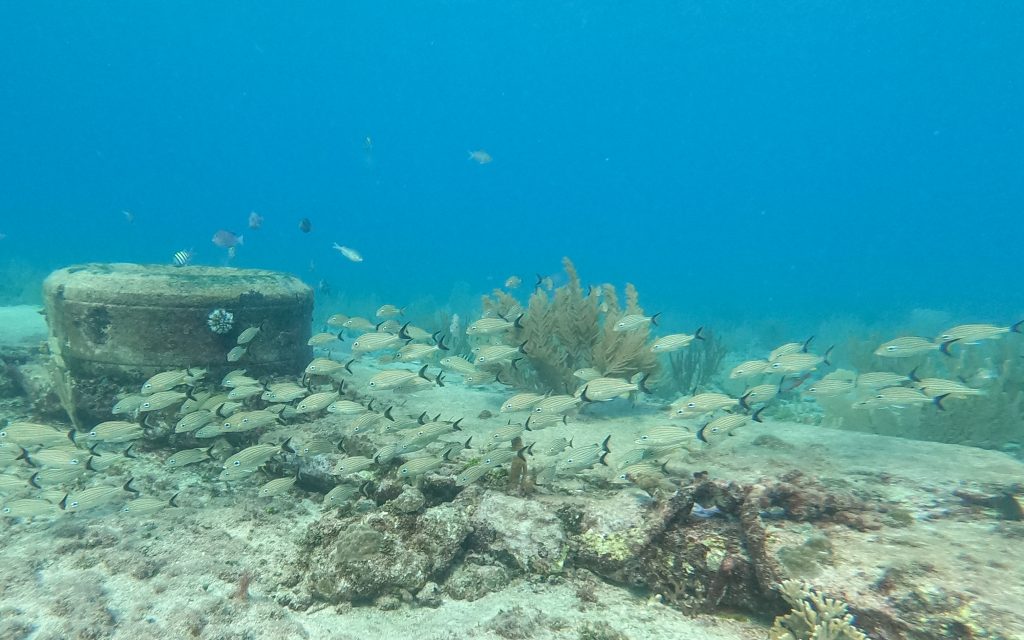 THE REEF IN FRONT OF PLAYA DEL CARMEN

All things fair, the reef in front of Playa del Carmen can not compare to the reef for instance in Cozumel, or further south in Belize. It has suffered dearly from various threats, like warming of the sea water and human activity. Still, the reef is a very popular destination for divers from all over the world. Right in front of Playa del Carmen you can find Jardines reef 10 – 12 meters under water (30 – 40 feet). The reef that we are going to with our Paddleboard Snorkel Reef Tour in front of Coco Bay is much more shallow, so it is a great spot to snorkel.

In case of stronger winds, and depending on your group, we can decide to go to a reef a little bit closer if that woprks better for you.

The reef is not too far from the beach. To get there we will need to paddle around the pier on Constituyentes, right in front of Playa del Carmen. This means that we will paddle out around 50 – 100 meters (200 feet) from the beach to go around it. We do this almost on a daily basis, so there is no need to worry. You’ll be in the best of hands.

When we arrive at the reef we will enter the water, put on our snorkel gear and snorkel around the reef for about half an hour while holding on to our boards.

We’d like to underline that everything we do is with the greatest respect and attention to your safety and the safety of the reef. 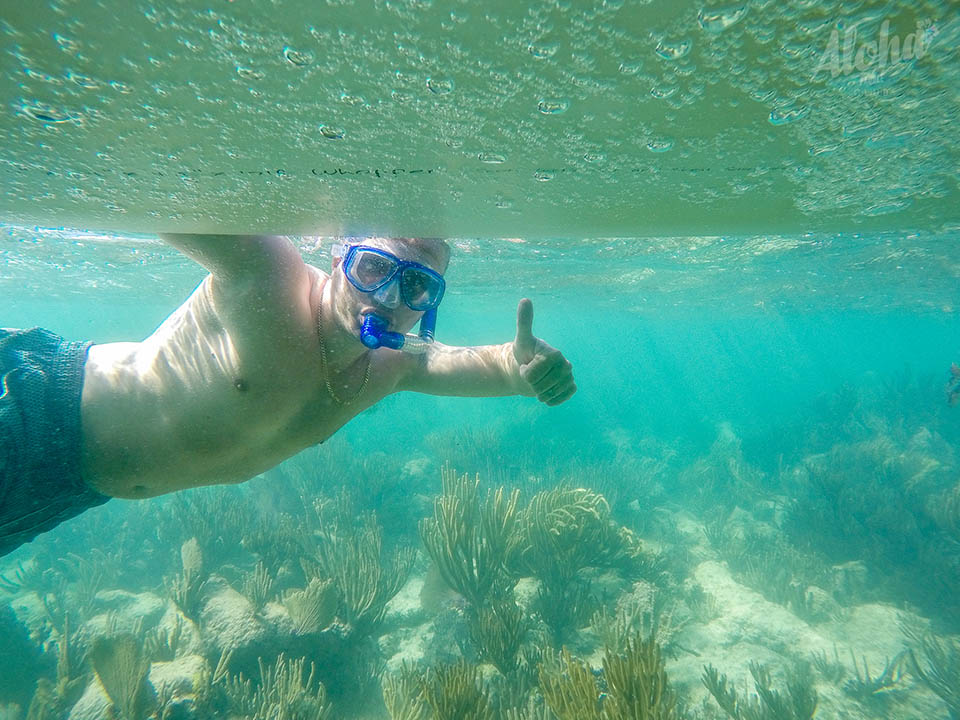 On a good day the reef in front of Coco Bay is about 30 minutes paddling depending on your fitness level and previous experience. The minute the wind picks up a bit this can easily become 45 minutes to 1 hour.

We recommend booking the Paddleboard Snorkel Reef Tour for the morning, when it’s not too hot and when normally it is less windy.

THE PADDLEBOARD SNORKEL REEF TOUR IS FOR ALL AGES AND ALL LEVELS!

The Paddleboard Snorkel Reef Tour includes instruction, equipment, guide, even photos! Just bring your towel, swimming outfit and sun protection and we’ll take care of the rest. Please do us a huge favor and use only reef safe sunscreen. If you don’t have any you can use some of ours. We also sell a great eco friendly and reef safe product at Aloha Paddle Club!

 5/5
Highlight of our trip!! We were a group staying next door and I went paddle boarding two times. We had two different guides and both were excellent! I am experienced and have my own paddle board at home and their instructions were spot on. They spoke perfect English and also gave the instructions in Spanish, so all could understand. Their website is easy to use and to book/reserve a spot. The owner is great to work with and I highly recommend Aloha! Thanks for the awesome time!!

We use dynamic pricing, which means that the price depends on the amount of persons that are coming. This way we will always be able to give you the sharpest price possible. Tip: try to find people that would like to do the Paddleboard Snorkel Reef Tour with you.

2 hours
$ 55 Per Person
BOOK NOW
Book safely and secure using your credit or debet card. Prices are in US $. For larger groups please contact us. Prices are excl. 6% credit card fee and excl.16% VAT. In case you need an invoice we can add this after your payment. We give a full refund with cancellations up to two days prior to the activity date!

WE ARE HERE FOR YOU!

With all these options we can imagine it’s a bit hard to make the right choice. Please do not hesitate to contact us. We’ll get back to you the minute we’re out of the water!

We’d love to hear from you…

All our beach options in a row for your convenience. Remember, you can cancel with full refund up to one day before the activity date (before 6 pm) so don’t worry and book your adventure!